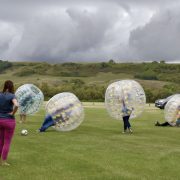 You know the moment when you volunteer to do something, but you don’t fully know what you have gotten yourself into?  You think to yourself “no problem – how hard can it be? I can figure it out as I go” Then the time comes to have it done and you have NO idea how you’re going to pull it off.  Yeah you know exactly what I am talking about! And yes…that is me right now.

I have literally been staring at those words every single month since February. I had nine months to write what could have been the greatest blog ever and yet, here I sit. I have nothing. “What am I going to talk about so I don’t sound like I fell off my chair and bonked my head while I was sitting here spinning in circles hoping that a relatable topic would just fall out of the air and hit me.” (Because that happens sometimes, right?)

Then I noticed a pile of mail sitting on my desk and just like that, I was sidetracked…or was I?

December mail may be the best mail month of the year! It goes from being 90% junk and 10% bills to 89% junk, 10% bills, 1% Christmas cards/letters/photos. I mean…that bright red envelope with the giant snowflake and handwritten address on the front can only mean one thing…an annual update from my friends and family. Some whom I see often and others who I only get to keep up with via their annual Christmas card (and Facebook of course).

And here we are…maybe not a blog, but more of a Christmas Letter from me to you! An idea that is in no way groundbreaking; but perhaps a necessity as we move into another year in an ever-changing world of banking, *ahem* Credit Union-ing.  Sorry OSFI! As I was creating this graphic I was actually blown away at how much we have accomplished in just 8 short months. We had a bit of a slow start on the year but we managed to cram a lot into the time we had left.

Some of my favorite 2017 moments include (but are in no way limited to):

Of course there were many other highlights this year, but these were the ones that really hit home for me and make me feel like our year was successful.  I’d like to finish off by sending a shout out to all our SYL supporters this year.  This is everyone from participants, community members, guest speakers, judges, system sponsors, new committee member applicants, and Credit Union sponsors. Without your support, volunteerism, listening ears, and encouragement (and money J) we would not be near as successful. Of course, a giant thank you goes out to my fellow SYL Committee members (both past and present). THANK YOU for all your hard work this year. I’m positive that you are all going to be standing together with me at the end of 2017 looking back with goofy grins on our faces wondering how we accomplished everything we have!

In my final month as the current Chair of the SYL Committee, I wish all you a very Merry Christmas and all the best in 2018!